Another month and another food review coming your way! In case you’re wondering, we’ve decided to move all our Hong Kong related posts onto our company site here, Humid with a Chance of Fishballs, and all our travelling related posts will remain at The Smoo Diaries.

There is so much awesome food in Hong Kong, but the pho scene has always been a bit lacking… Until about maybe a year ago? It was like everybody at the same time had this epiphany that transpired the opening of a dozen pho shops! The golden standard that everybody talks about in Hong Kong is Brass Spoon, so I actually went to give that a try to see how Fuhn compares.

Fuhn, pronounced “fun”, is advertised heavily as North American style pho, like what you would expect in Vancouver or LA, so we were uber excited to give it a try when they invited us!

Fuhn is located in the L Square in Causeway Bay. I didn’t know where that was and ended up walking way farther than I should have from exit A, so make sure you get out of Causeway Bay exit C, and then it should only be a super quick 3 minute walk. The exact address is 1/F, The L. Square, 459-461 Lockhart Road, Causeway Bay. 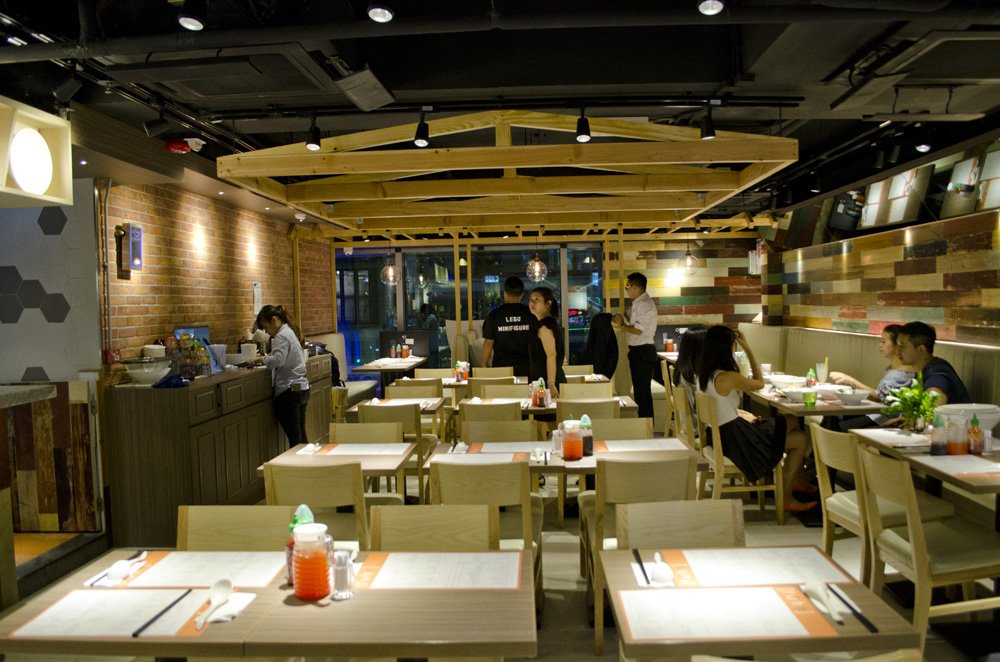 I love a good gimmick and Fuhn delivers in that department as well. So Fuhn sounds like “fun”, but it also sounds like rice noodle in Cantonese (har har). The accent on top of the you isn’t an accent but it’s supposed to represent a Vietnamese hat. Cute eh?

Pretty bright and clean. Try to get the tables by the wall, because you get your very own water tap at your table, which I thought was pretty cool (people in Hong Kong in restaurants are sometimes mean when you ask for free water!). 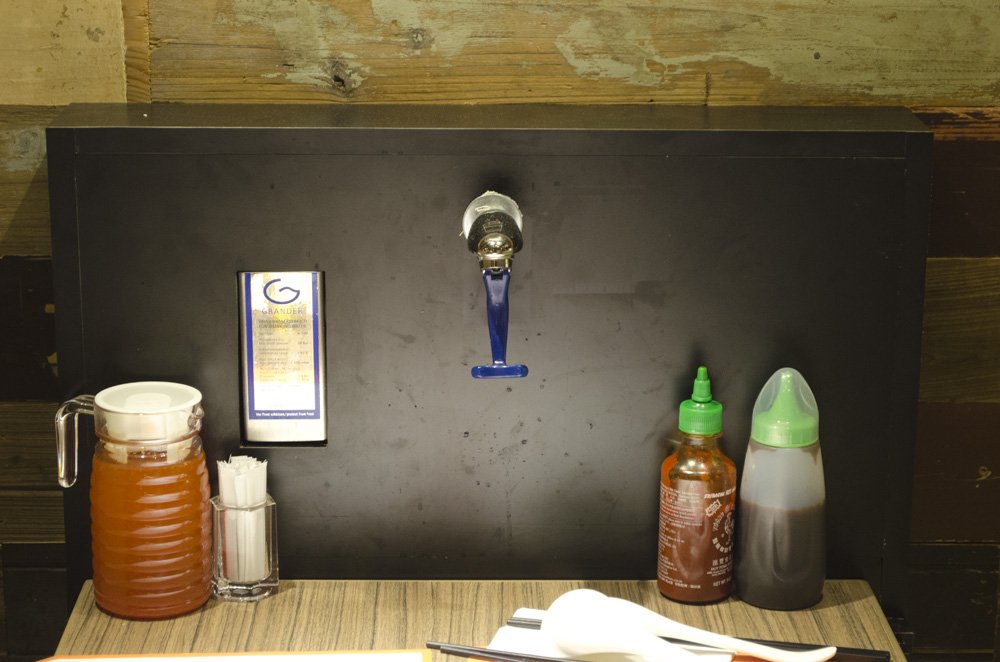 We started off with drinks. I don’t even like avocados (I know, don’t kill me), but I do have to admit that their avocado milkshake ($48HKD) made from avocado, condensed milk, evaporated milk and blended ice was very yummy and is one of my must-trys at Fuhn. The ice blended coffee ($38HKD) was also reminiscent of a Tim Horton’s frap but with half the sweetness. 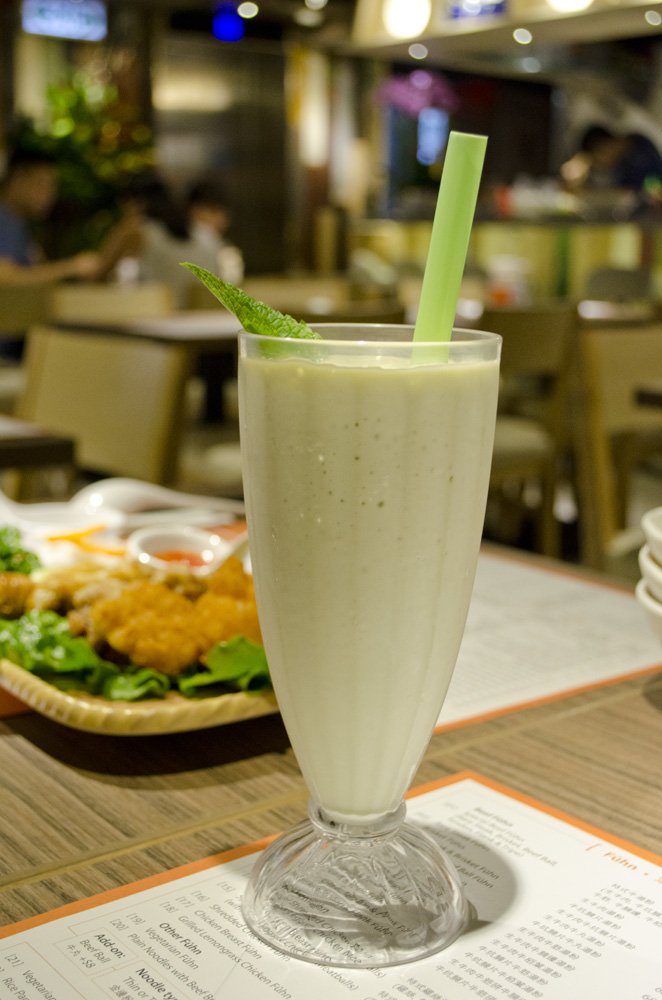 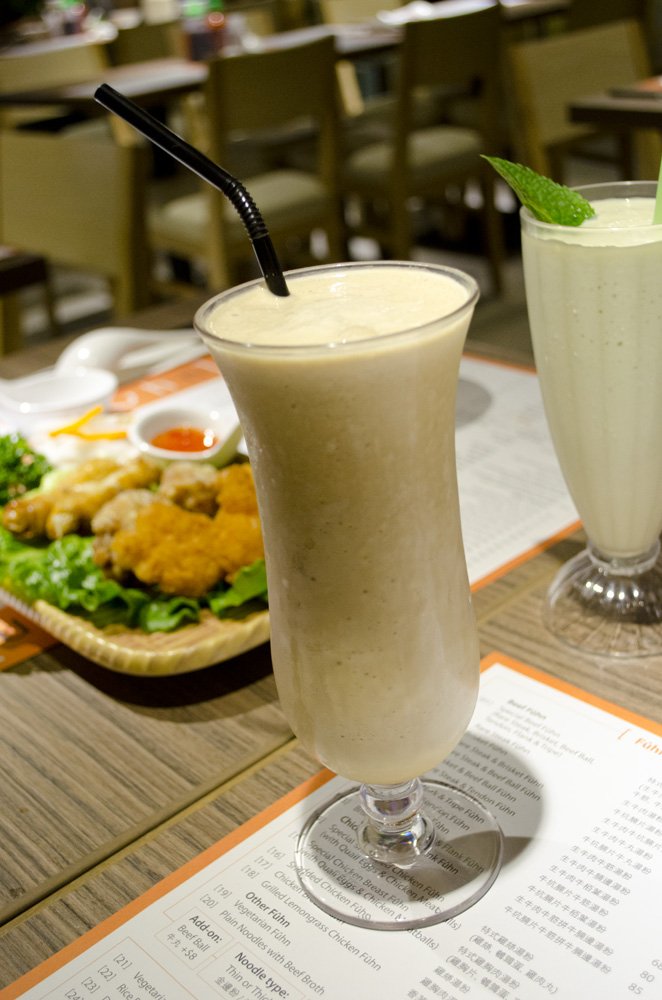 Moving onto the assorted platter, which isn’t on the menu but we were told would be soon… We had a trio of butter chicken wings, spring rolls and shrimp cakes (2, 3, and 4 person sizes at $98, $145, & $188, respectively). The wings and rolls were standard, though the spring rolls are made from two layers of rice paper, the inner layer being chewy and the outer inner being crispy.  On the other hand, the shrimp cakes were outstanding. Kevin, one of the Fuhn founders and a Vancouverite himself, said that they don’t use any flour and it’s just straight up shrimp for the filling. Needless to say, the shrimp cakes had an amazing al dente texture. 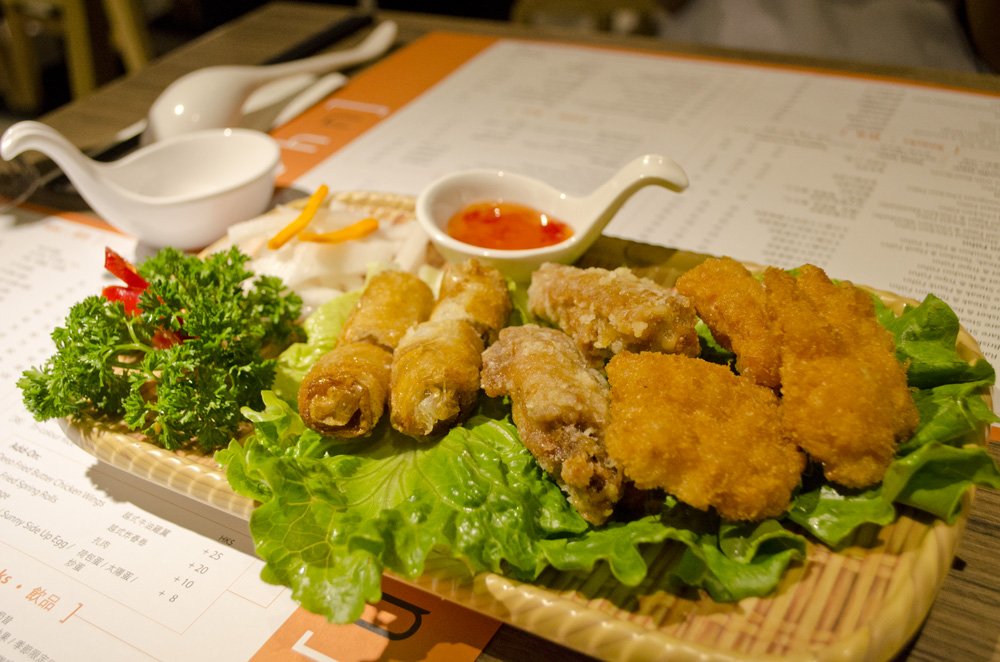 Moving onto the pho, where we asked about their pho-losophy. So the science behind what makes a great bowl of pho, according to Kevin, is that besides the soup, noodles, and meat, good water is a major factor to a good broth. They use the water purifier system, Grander, and that’s what they claim is their secret to a great bowl of broth!

Alright, time for the hyped “Vancouver style pho” with no MSG! I know, my eyebrows are raised too. Their phos come in 3 sizes – Regular, Large, and Extra Large. We tried the #14 Special shredded chicken pho with quail eggs and chicken meatballs (R: $80, L: $90, XL: $100) and the #1 Special Beef Fuhn with rare steak, brisket, beef ball, tendon, flank & tripe (no R; L: $98, XL: $118). Shhh… there’s a secret XXL size off the menu – inquire with them if you’re interested in eating challenges! I will address that the prices are higher than what I would normally pay for a bowl of pho; however, the regular is pretty massive. If you’re looking to try the avocado shake, and shrimp cakes as well, I would recommend you to share a Large with a friend and it should be more than enough to satisfy both of you. 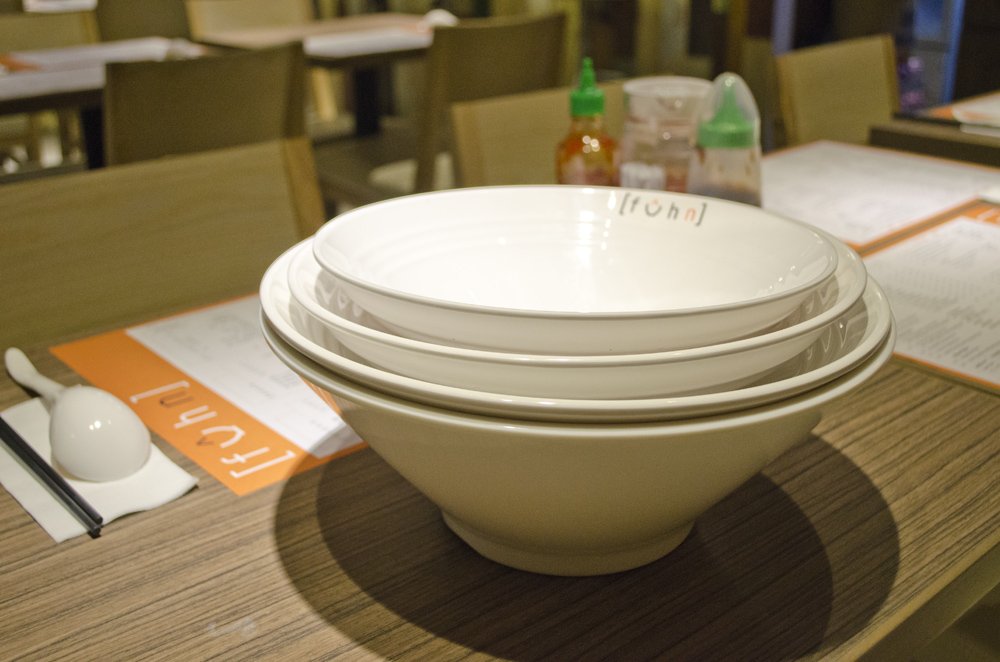 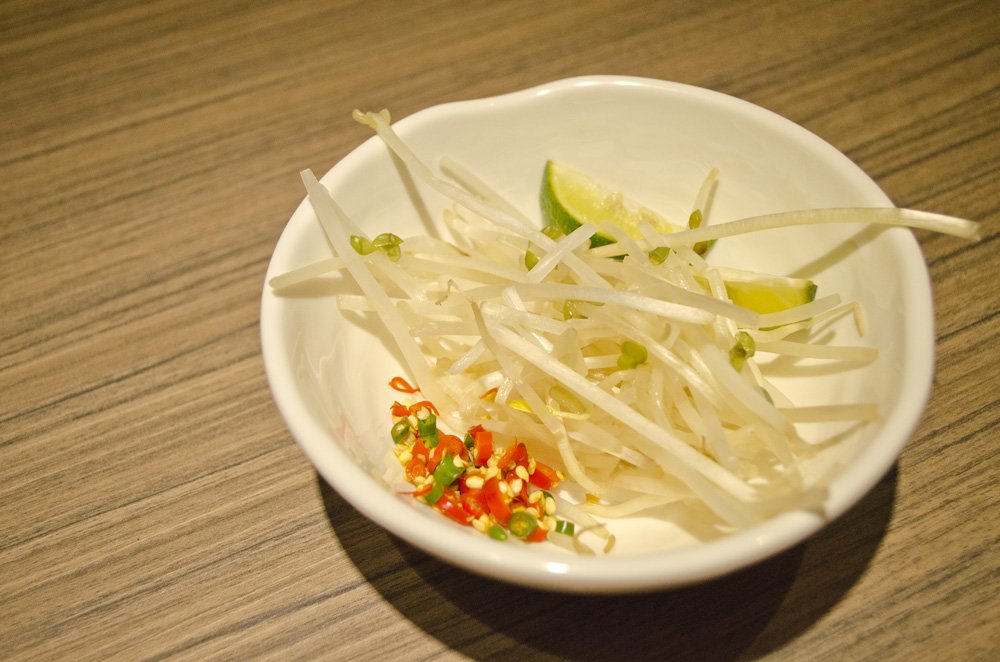 Let’s start with the condiments! I liked how they gave us all the bean sprouts (blanched), with the lime, and chilli peppers. I could have done with more bean sprouts but all was forgotten when their “plant” came out. Apparently, the “plant” only comes out when you specifically request for it, so if you like a combination of herbs in your pho, make sure to request for the “plant”. (I named it the “plant” but I’m not really sure what the real name is.) Oh, and they also have the real Sriracha (with the rooster) sauce and the hoisin sauce. Yay! 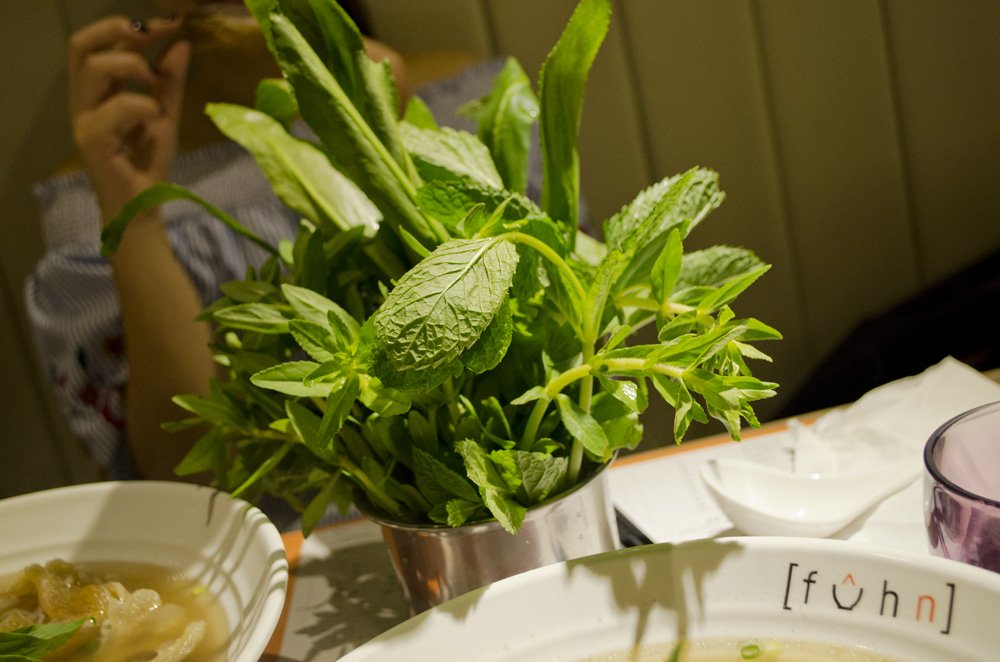 The shredded chicken pho was flavourful, and fragrant yet light with the sweet flavour of daikon really coming through – this would be a perfect meal for somebody nursing a cold. The broth is delicious and I actually preferred it over to the beef one. 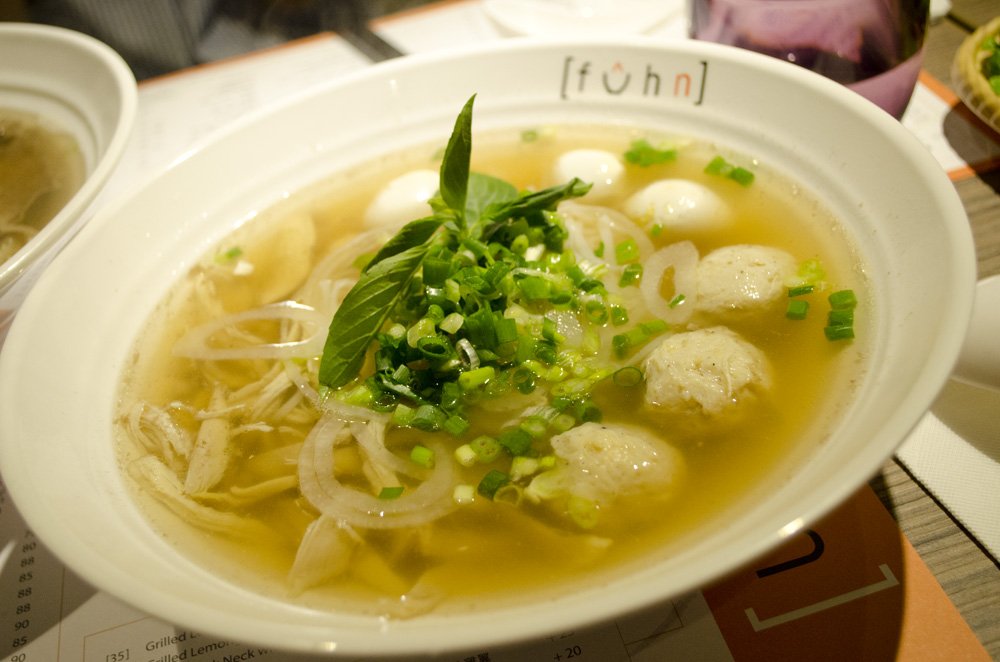 Let’s get the money making shot for the infamous dac biet pho: 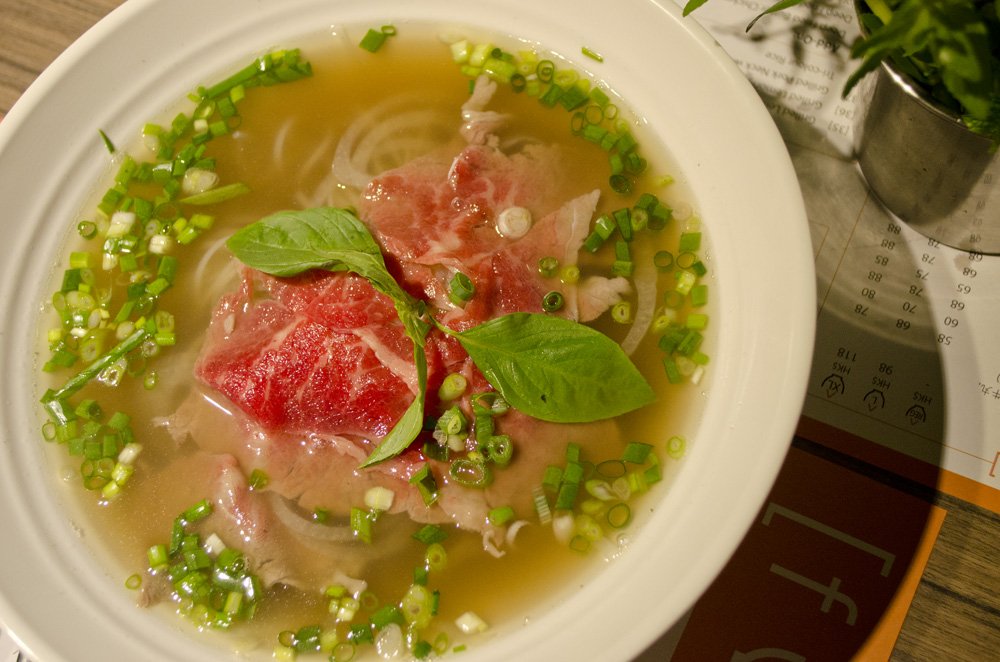 Right before serving, beef oil is added to the pho (all these little details!). One sniff, and I must say the broth is more herby & cinnamony than any other pho broth I’ve tried in Hong Kong. Of course, it’s never going to taste exactly like how it tastes in Vancouver, but Fuhn is the place that comes the closest in my books. Not going to throw in any shade, but I did just try another pho place that touted themselves as North American pho and Fuhn is definitely much closer. 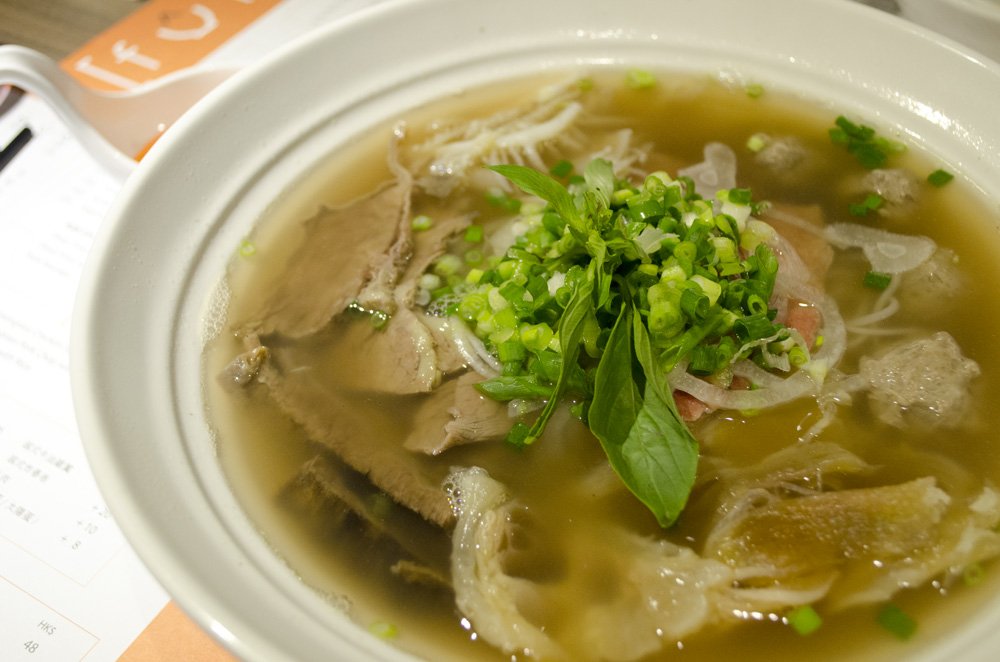 So everybody talks about a good bowl of pho in terms of the broth, noodles and meat, so obviously, we’ve got to do the same right? We already spoke about the broth. Now onto the noodles which were actually the pho noodles, the thin rice noodles (金邊粉) that you get in Vancouver, and not the wider rice noodles that most pho places in Hong Kong serve up. Woohoo!

Now for the meat, Fuhn was quite generous with the meat and if you look at the photo above, you’ll see that the meat is quite lean and not at all the subpar quality that you find in your Cafe de Coral hotpot (super fatty). Fuhn uses American Angus beef and will feature Wagyu beef later on as well for those Wagyu lovers.

The last thing we tried was the Trio rice ($88HKD), which even the owners would admit the title is misleading… I thought the rice would be multi-coloured but the trio really stands for the three different types of meats that accompany the rice. I’m a noodle soup girl at heart and not a rice fan but who can argue to a fried egg over rice? 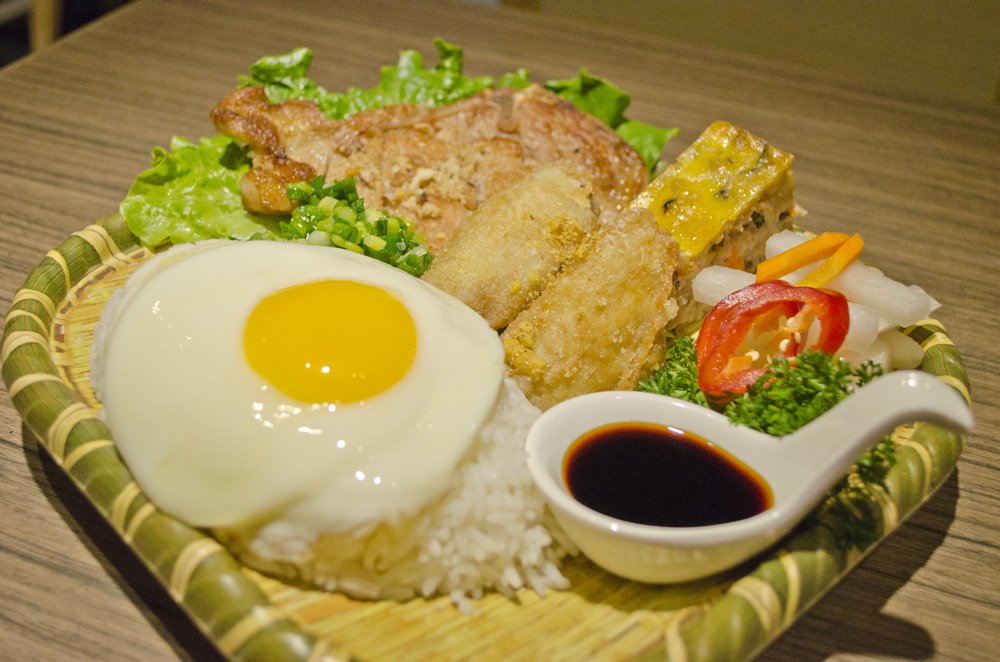 Would I recommend Fuhn? Pho sure! It definitely isn’t all the cheap side on the pho scale but you do get what you pay for as you can tell they use quality ingredients.

I would think that Fuhn would be particularly good for lunch or for your late night Tsui Wah substitute (they’re opened till 4am on Friday & Saturday to cater to the beer pong crowd). The lunch menu is particularly reasonable at $79 HKD for a snack (appetizer), main and a drink if you’re a bit more price conscious. Whilst no place outside of Vancouver will ever have that “Vancouver Pho taste” because it’s the taste of my childhood, Fuhn comes the closest out of the places I’ve tried in Hong Kong in terms of taste and the finer details. The stand out must-trys here are: the avocado milkshake, shrimp cake, & either the chicken or beef pho.

COUNT THE MEMORIES, NOT THE CALORIES